Here you will find the description of the crossing stages in both directions of the march. As well as the link to our account in Wikiloc where you can download the tracks of the route.

Estels del Sud is a five-day circular trek, let us know the days you have available and we take care of reserving the Stages that best suit your needs. It can be done in both directions. So… Just worry about enjoying the trek.
STAGE

To carry out this stage, we have several alternatives, but the option we are going to describe is passing by the gubies of Parrissal, marked with blue Stars.

Leaving the refuge, we take the track to the left, in the Mascar direction. We pass next to a fire prevention raft and we´ll descend a path to the Prat d´en Rubiera.

In a short time we reach another raft at the entrance of the ravine (Barranc de la Coscollosa); we descend the ravine to the confluence with the river Matarranya. In this point we also could climb up to the Clot de Maçana and follow the GR-8, or follow the Arany PR.

We´ll continue down the river until reach the canyon. Once here, the easiest option is to cross the river, depending on the flow.

We also have the option to climb up the Romeret Pas. It´s a spectacular passage equipped with steps and chains, it´s only suitable for experienced hikers in passages like this.

Once in the other side of the canyon, we´ll go down the river following the track and the “pasarelas” (a walkway just above the river level) to reach the end of the path (there is a parking area) that comes from Beceite. From this place starts a track that goes through the Mas de Sant Miquel and leads us to hotel Fábrica de Solfa (Beceite).

We leave Beceite and we take Parrissal direction. Then, we turn left for the GR-8 and go through the Mas de Sant Miquel until reach the end of the Parrissal track (parking area).

Now, we follow the track parallel to the river, passing the “pasarelas” until we reach the Gubias. Here, we have two options, depending on the flow; the easiest one is to follow the river and cross the canyon

The other one is to take the path of the Pas del Romeret (It´s a spectacular passage equipped with steps and chains, it´s only suitable for experienced hikers in passages like this).

Once in the other side of the canyon, we continue up the river to the Pont de la Guimerana and a bit further we take a trail to the right following up the wonderful Barranc de la Coscollosa.

At the exit of the canyon, and after a raft, we find the Prats d´en Rubiera. From here and following the tracks and trails, and surrounded by lush pine forests, we reach the Font Ferrera Refuge. 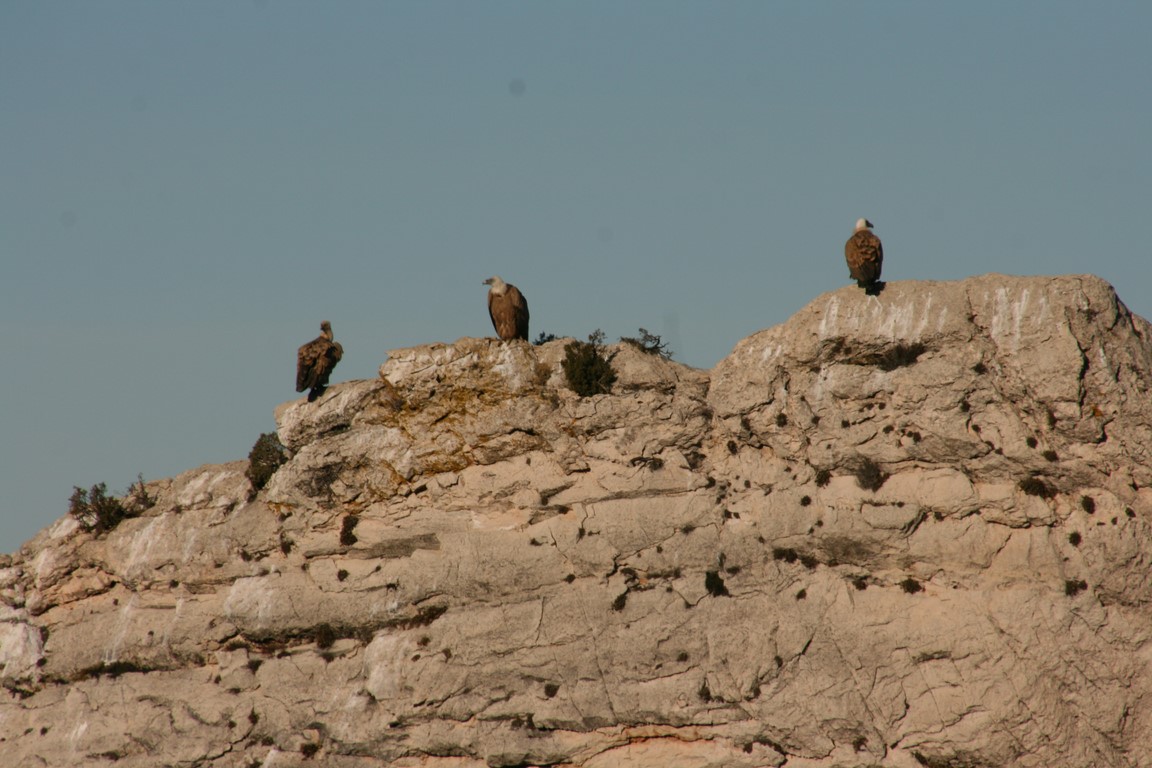 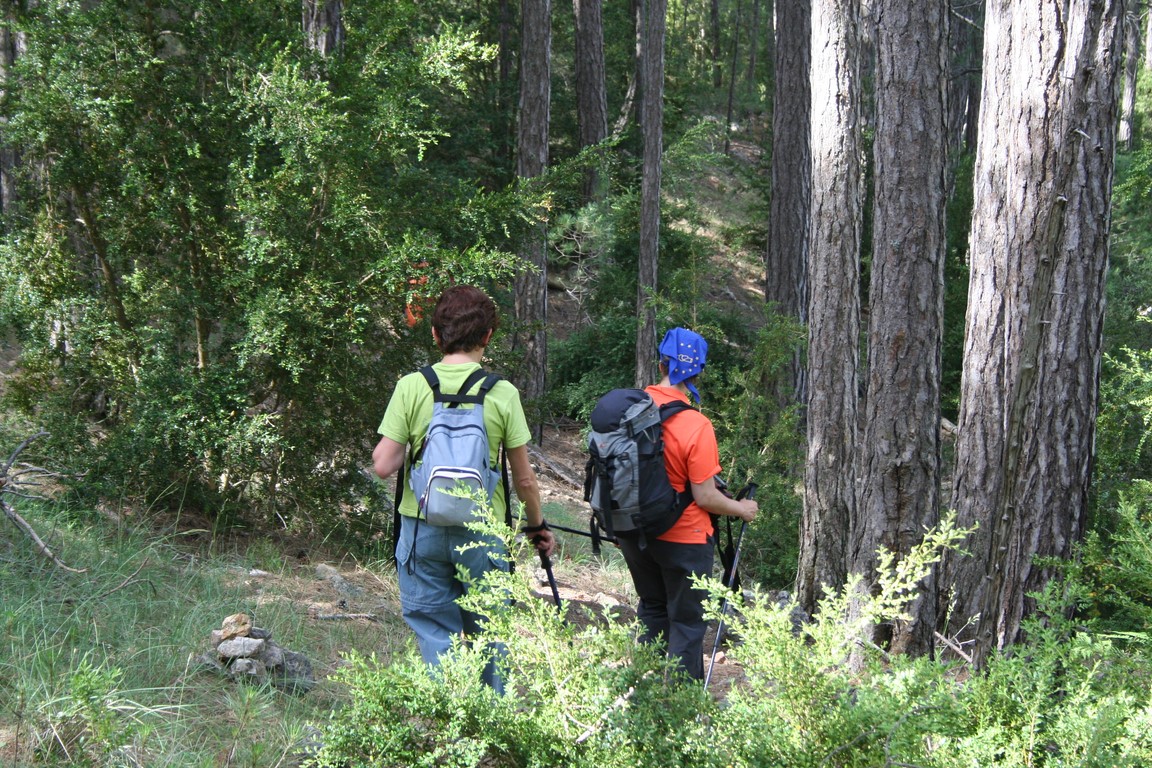 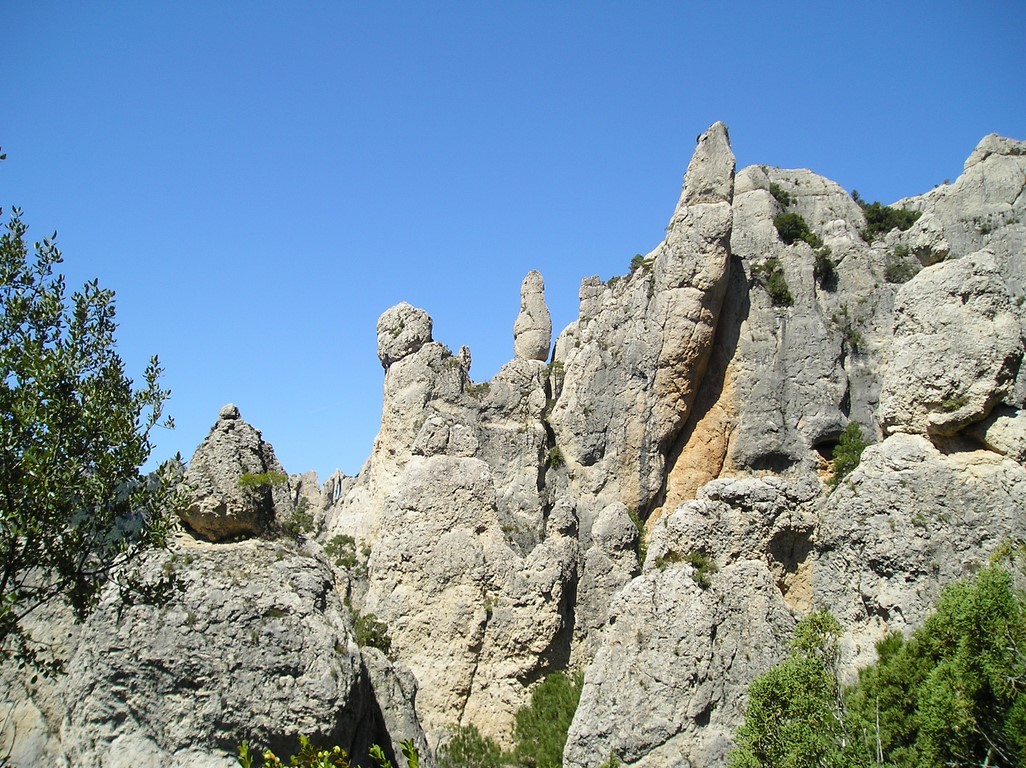 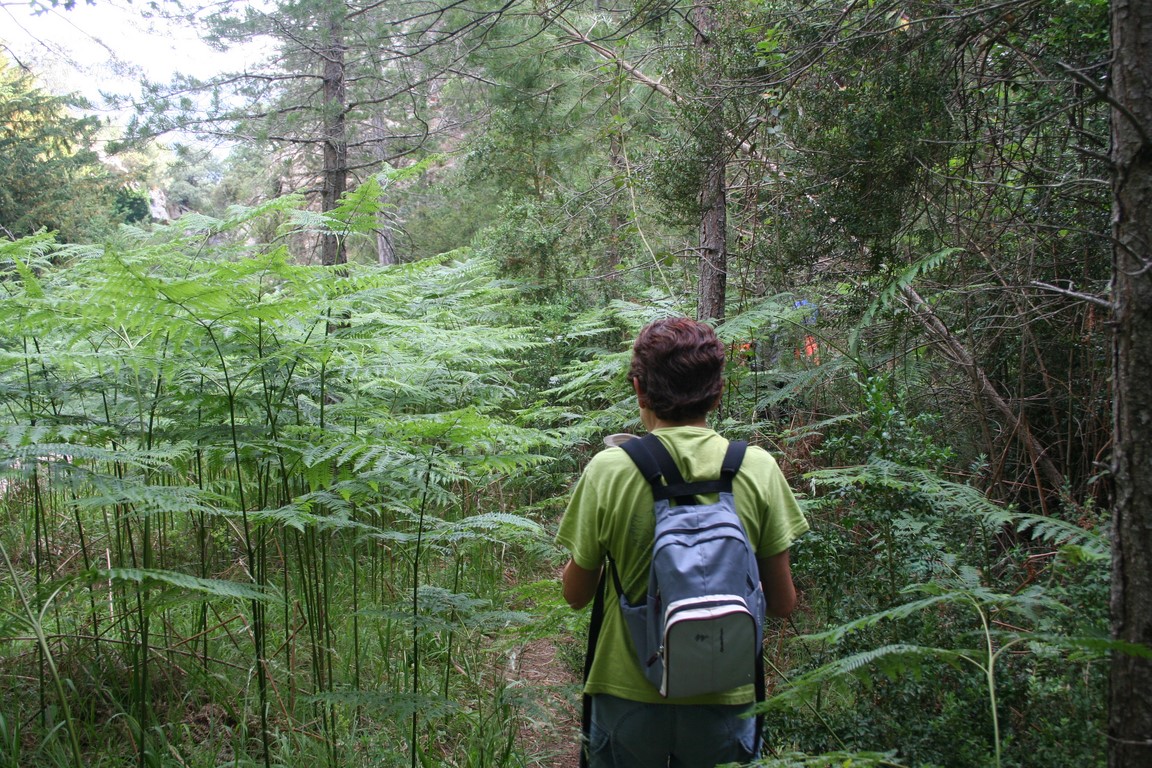 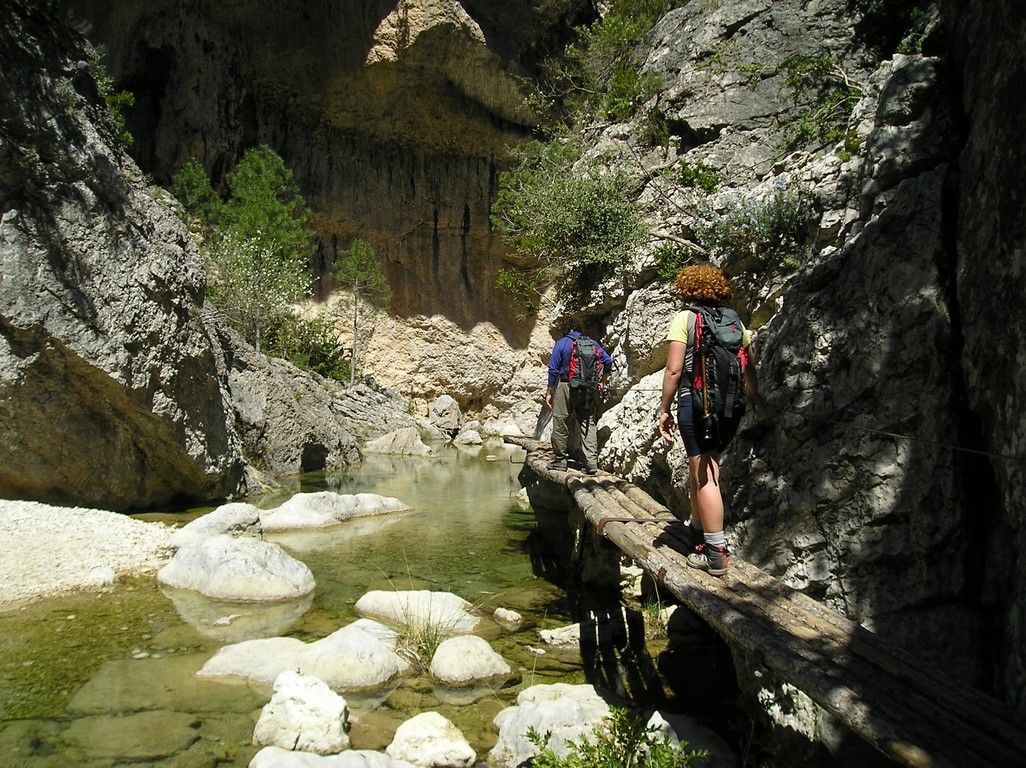 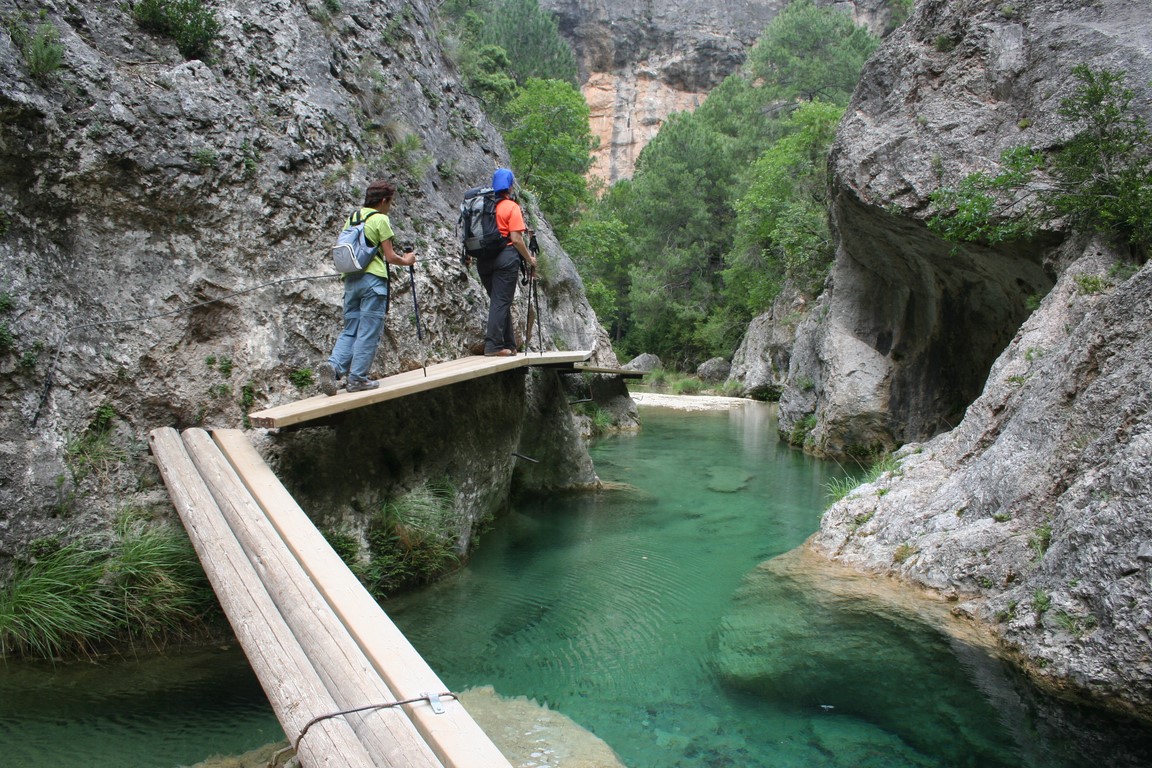 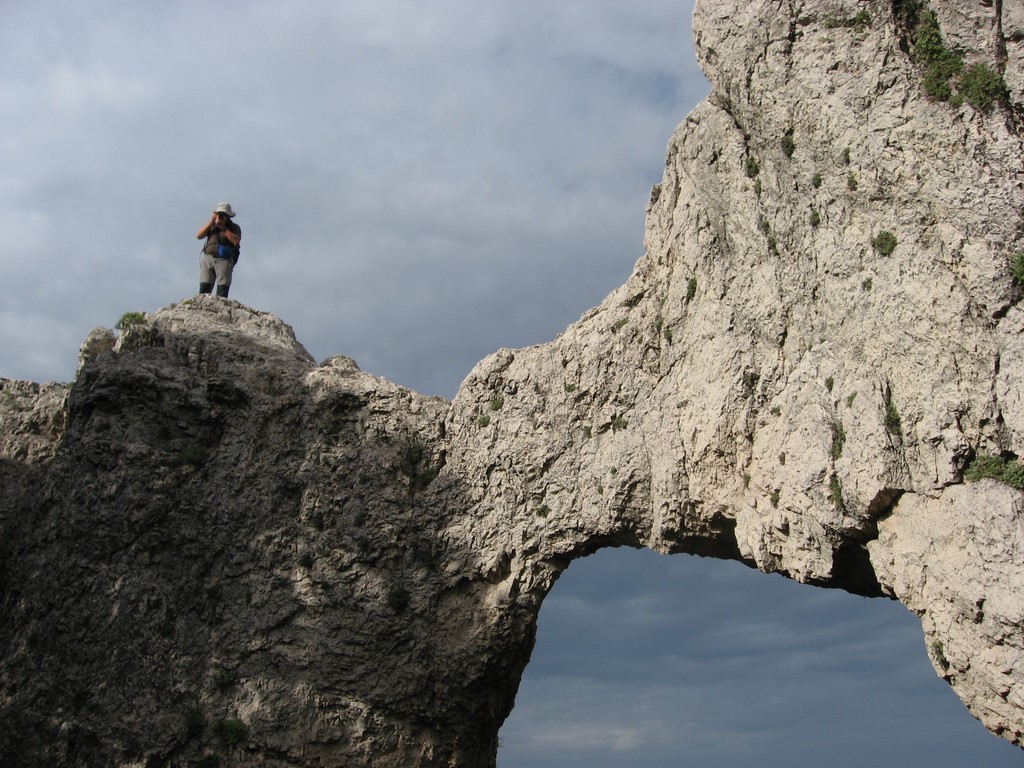 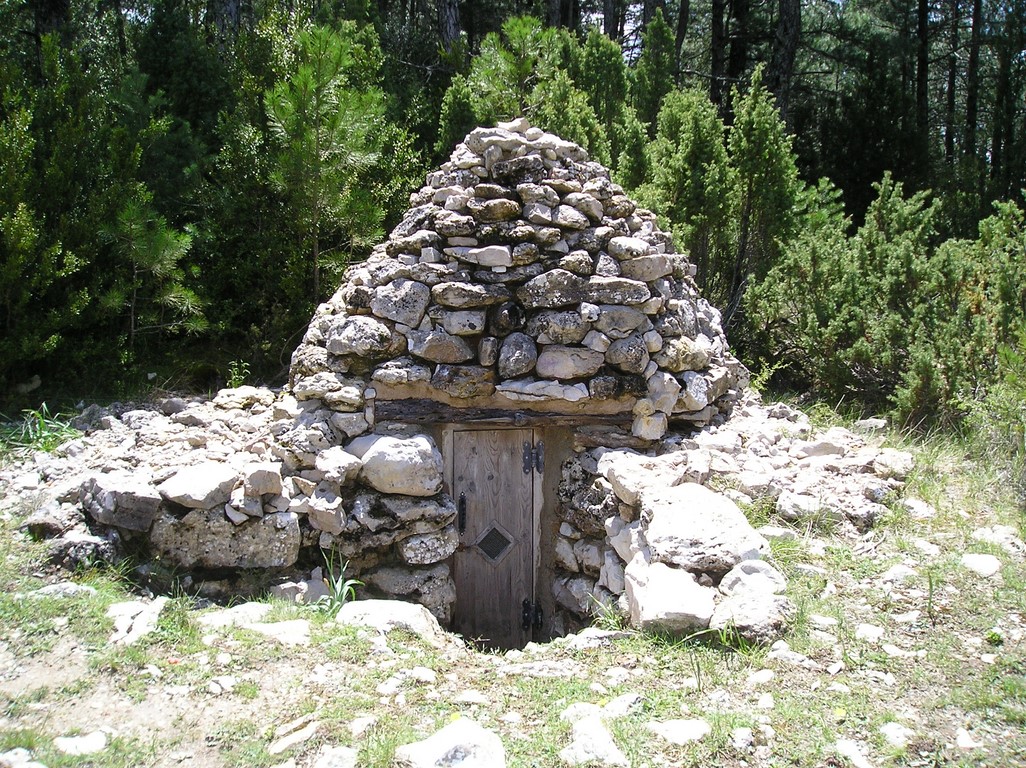 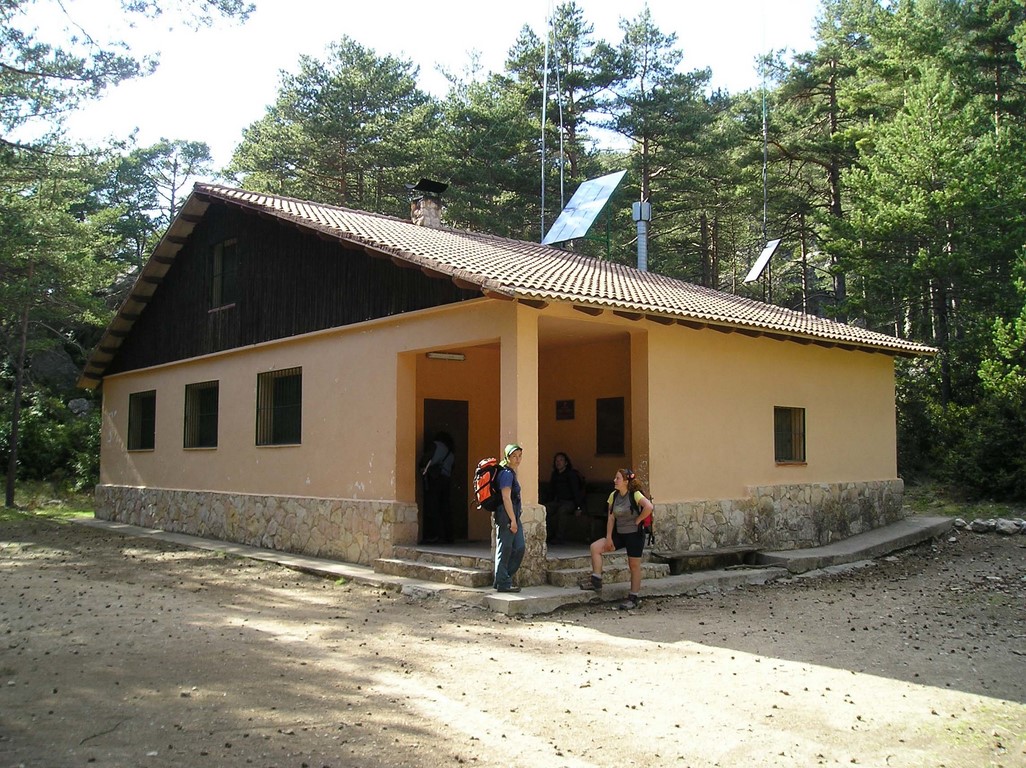 Leaving the hotel, we climb up to the highest part of the village. At the last houses you´ll take a trail to the right following the PR marks (white and yellow).

At the end of the trail you take a track to the right until you reach the detour of Penyagalera. You take the climb (PR) trail to the top.

Some meters before the top, we turn right a trail down (see the blue Star). We´ll go through the coll de Pelele and arrive at the river Algars

Just after passing the river we turn right along a trail that will take us up to the Coll de Xertó and will lead us to Les Valls. From here we´ll go down the trail along the river until it reaches a track.

In this point we take right a trail climbing up to the Coll de la Creu. Here, we reach a track that we follow to the right; a bit further we take a trail to the left.

This trail leads us near the Mas Nou, where we´ll take the asphalted path to Arnes (Lo Corral).

We leave Arnes by the way of the Estrets until the outskirts of the Mas Nou, where we´ll take a track right to Beseit. We follow it some minutes until we turn a trail right.

This trail reaches a track that leads us to the Coll de la Creu, where we take a trail to the left. We´ll pass near the Mas de la Creu and by the margins of the fields we´ll go up a hill. From here and in descent we´ll arrive at the Riuet de les Valls.

We´ll climb up it passing under the Roca Grossa and getting to the paradisiacal place in front of the ruins of the Mas de les Valls, where we´ll take the trail that crossing the Coll de Xertó we reach  the river Algars, a little over the Toll del Vidre (fountain).

We cross the river Algars and follow a path until we take the track to climb up Penyagalera, passing through the coll de Pelele we reach its top. Landscape wonderful viewpoint.

From the top and following the PR marks, we´ll descent to the river Ulldemó. Crossing the river, we´ll take the track to the right and some meters later, in a very closed curve, we see the PR marks to the left. Following it we´ll arrive to Beseit (Hotel Fábrica de Solfa). 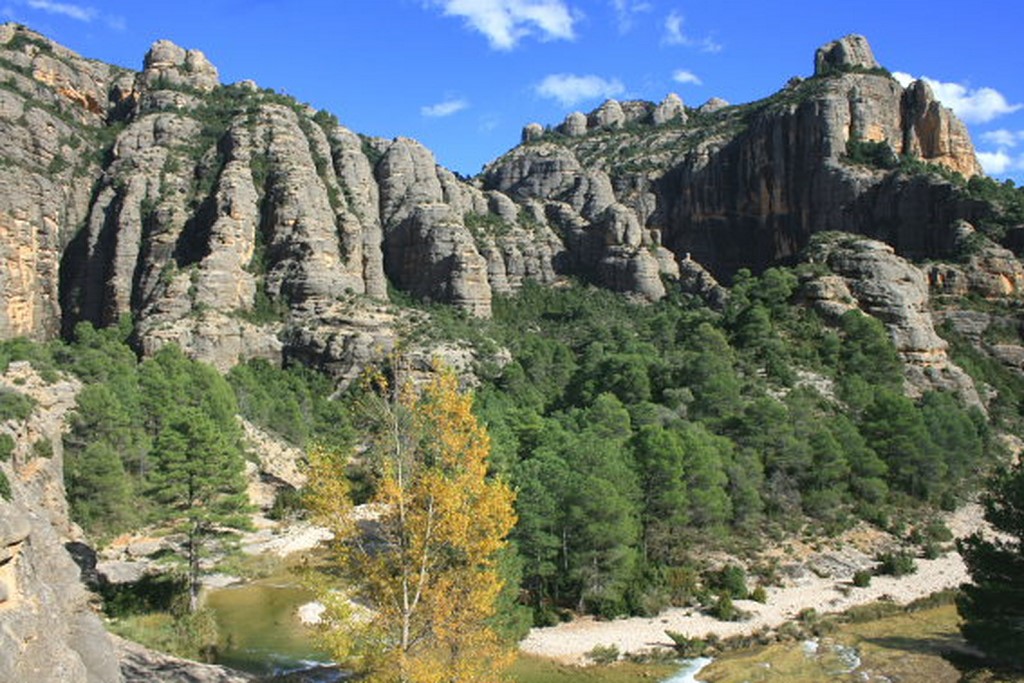 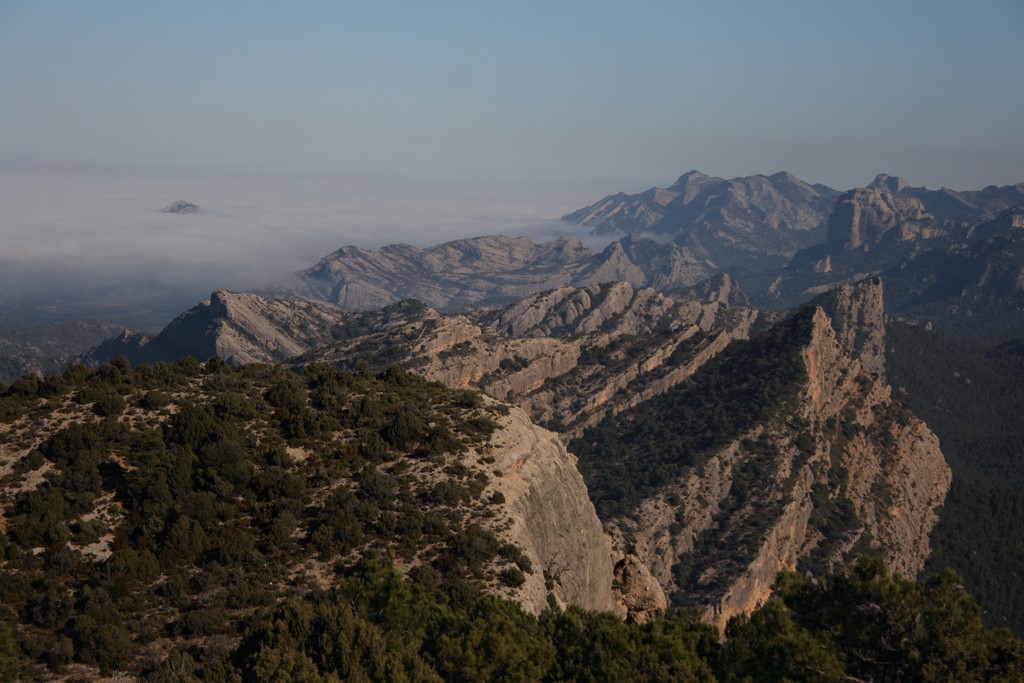 We go up  the canyon and at the exit we´ll follow a path to the left that takes us to the Franqueta paved track. We follow it until we turn right to the Roques de Benet.

We climb up to Coll de la Terra where we take a path that goes down to Barranc de Piquer. We´ll follow the track by the indications of “Pas Alternatiu” that lead us  to the Masos de Fandos i Capella ruins.

From here, a strong descent takes us to Ca les Barberes, the lower part of Paüls.

We climb to the upper part of the villaje passing the cemetery and following up the GR-7 until a crossroad where we leave it. We take the path to Font del Morellà, and a bit later we follow the trail to Coll de la Gilaberta.

From the hill, we´ll go down to the Mas de les Crevetes de Lloà ruins, and then to Masos de Fandos and Capella, where we´ll take the “Pas Alternatiu” trail going down to the ravine.

Following this trail we reach the Barranc de Piquer, usually with wáter, already under the Rocks of Benet. We´ll climb up to Coll de la Terra and then we´ll descent a path until we find another paved path that comes from the village of Orta and goes to the Franqueta.

Here, we turn left climbing up to Coll de Blanco. In this point we can see the Parc Natural post and also the blue Star marks that we follow until the Lliberós area and the Estrets.

We´ll descent the canyon´s track and at the exit, before a cobbled ramp, we´ll follow the trail with the PR marks that goes parallel to the river. This trail arrives to a track that, after crossing a ford, leads us to a paved track that we follow to the left, to Arnes village (Lo Corral d´Arnes). 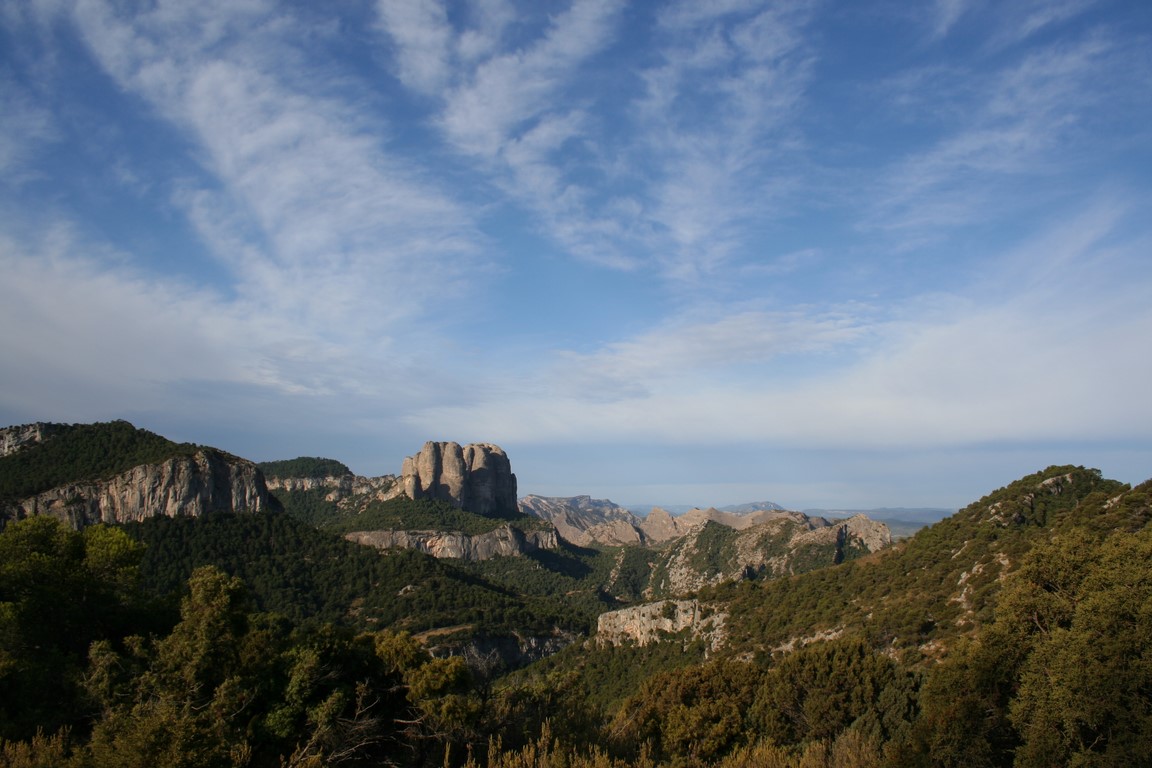 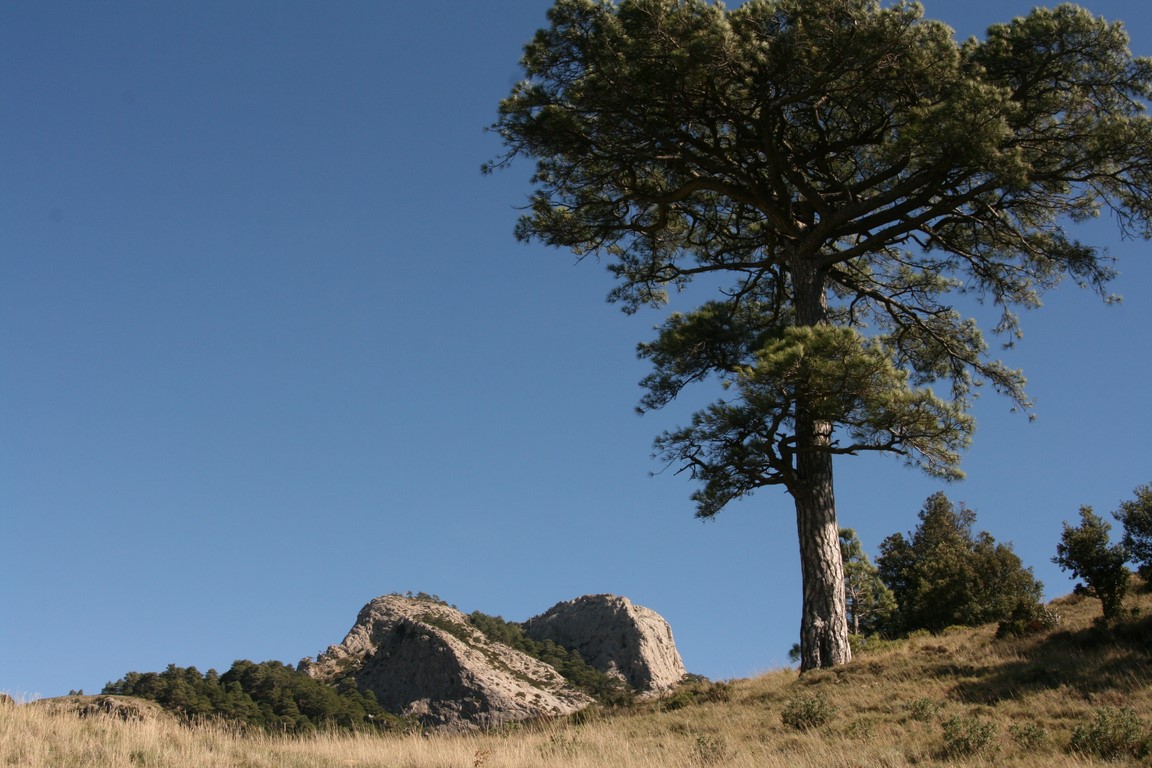 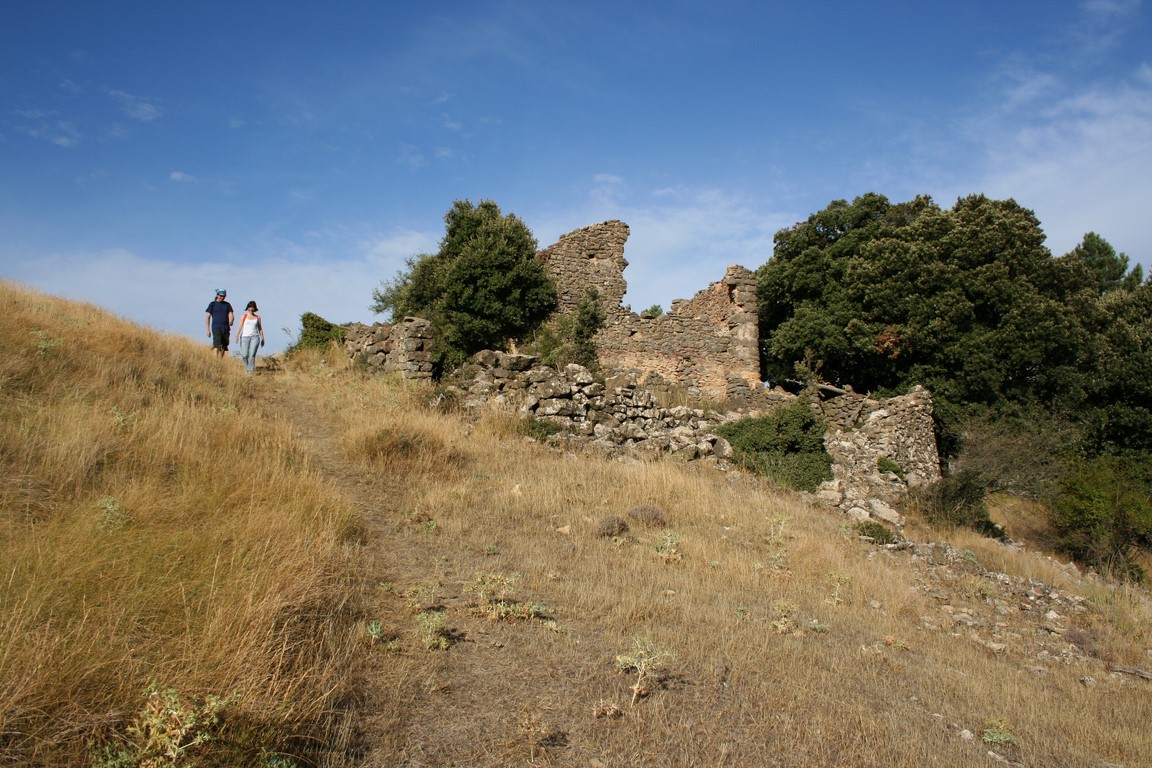 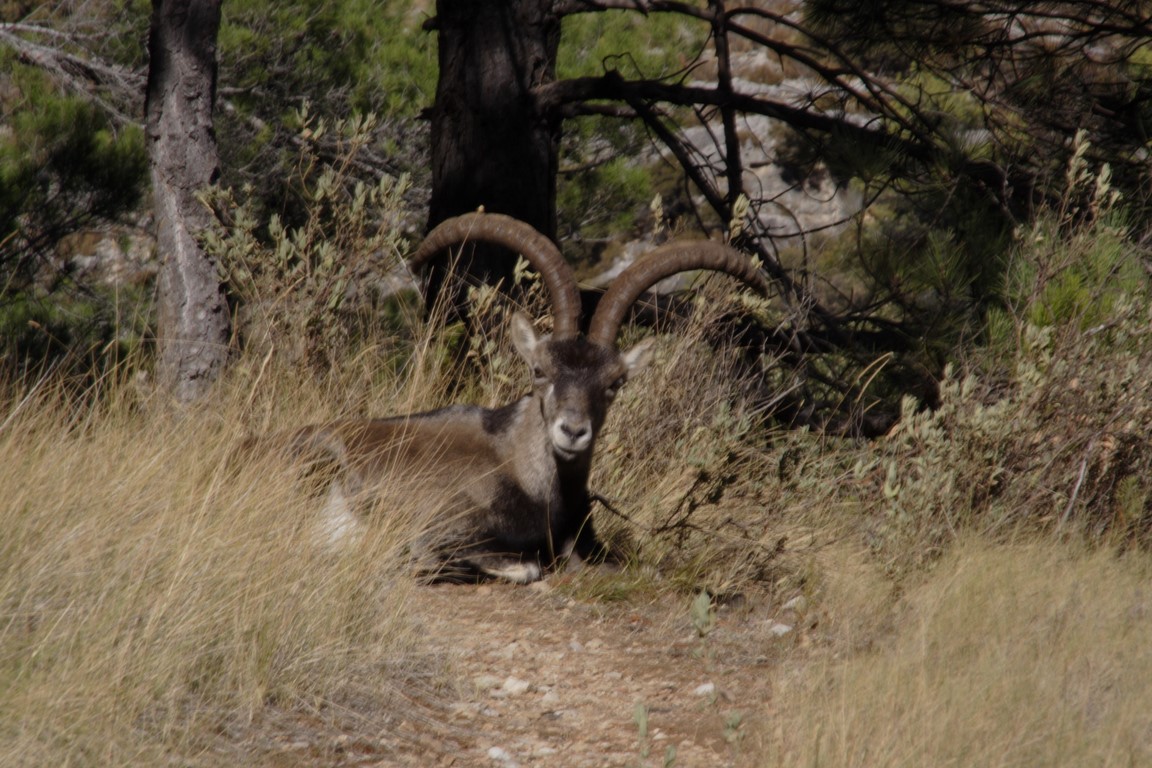 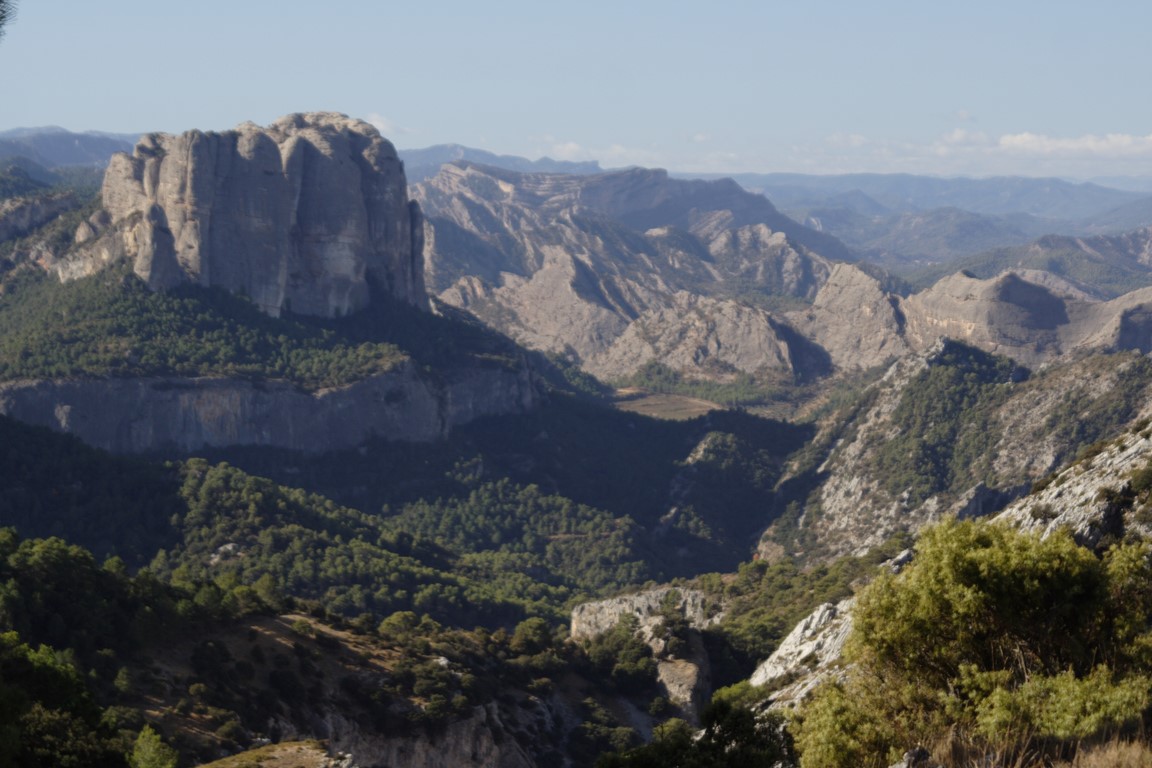 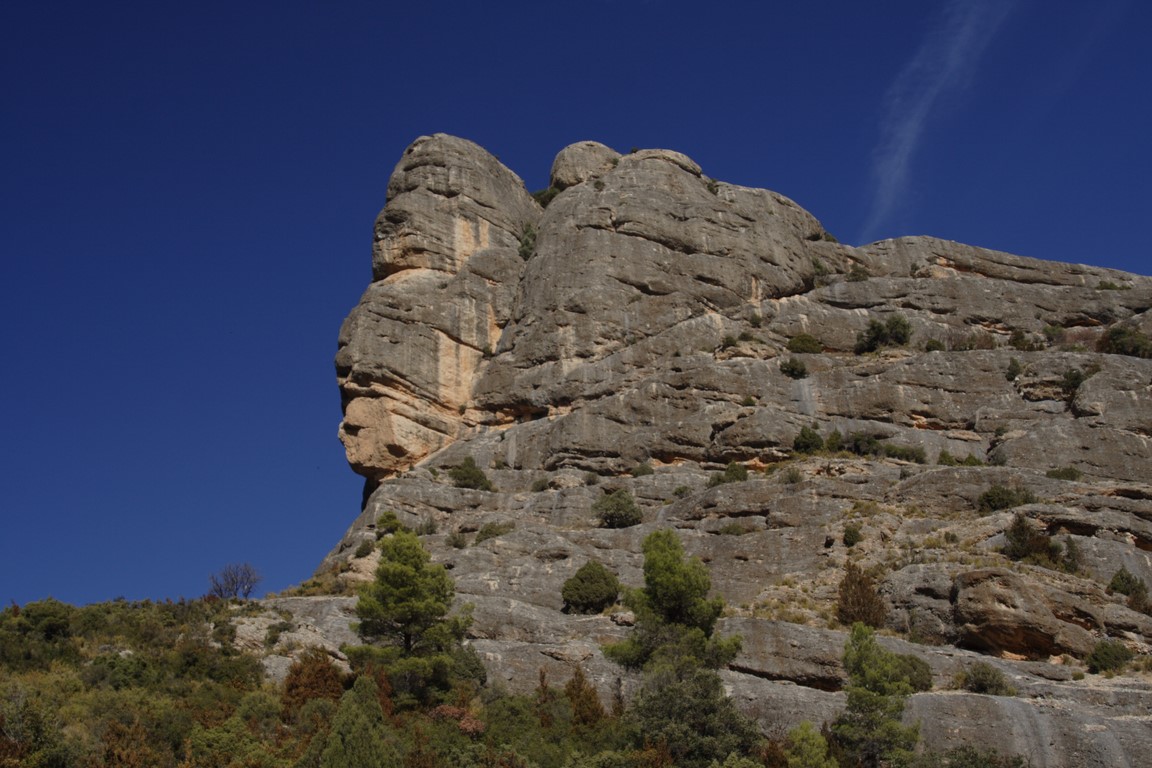 We leave Ca les Barberes by the Sant Roc´s way, once there we let the Area Recreativa to the left following the Estels and GR-7 marks, climbing up to the Coll del Camp.

We follow the track crossing hills, passing under the Espina and arriving to Rases de Marraco (pay attention in case of wind or fog). Then we cross the Coll dels Eriçons and we reach Les Clotes Refuge (it is not guarded).

We´ll climb up Carabasses and Caubet hills to reach les Foies (pay attention as there may be bulls grazing).

We cross the Carroveres track and continue straight. Later, we´ll go back to the track. We´ll follow it to the right until, next to some buildings, we´ll take a trail to the left that we follow until we reach a firewall. Now, we turn right following  the Stars marks to the Nou Refugi de Caro.

We leave Nou Refugi de Caro taking the GR-7 to Paüls by a paved path. We´ll walk about 100 meters and we´ll find on the left an esplanade with landmarks. We follow the landmarks until reach a firewall (Electric Towers).

We climb up the firewall, we´ll find a trail that crosses it ( we don´t take it), we follow down the firewall until we reach again the GR-7 (we´ll follow it the rest of the stage) and we follow it to the left until we arrive to the path in Les Foies direction.

We will shorten the path on a trail to the left until we reach les Foies (pay attention as there may be bulls grazing).

From here, passing the Cauvet and Carabasses colls we will arrive to Refugi de les Clotes (without guard). We´ll follow the GR-7 until Coll dels Eriçons and the Rases de Marraco (pay attention in case of wind or fog).

Near l´Espina we will cross Alfara and l´Enrajolada hills. Always following the GR-7, we´ll pass the Ginjolers and del Camp hills.

We descent to Sant Roc´s “Area Recreativa”, where we´ll find water, and from here we follow the track to Ca les Barberes in Paüls. 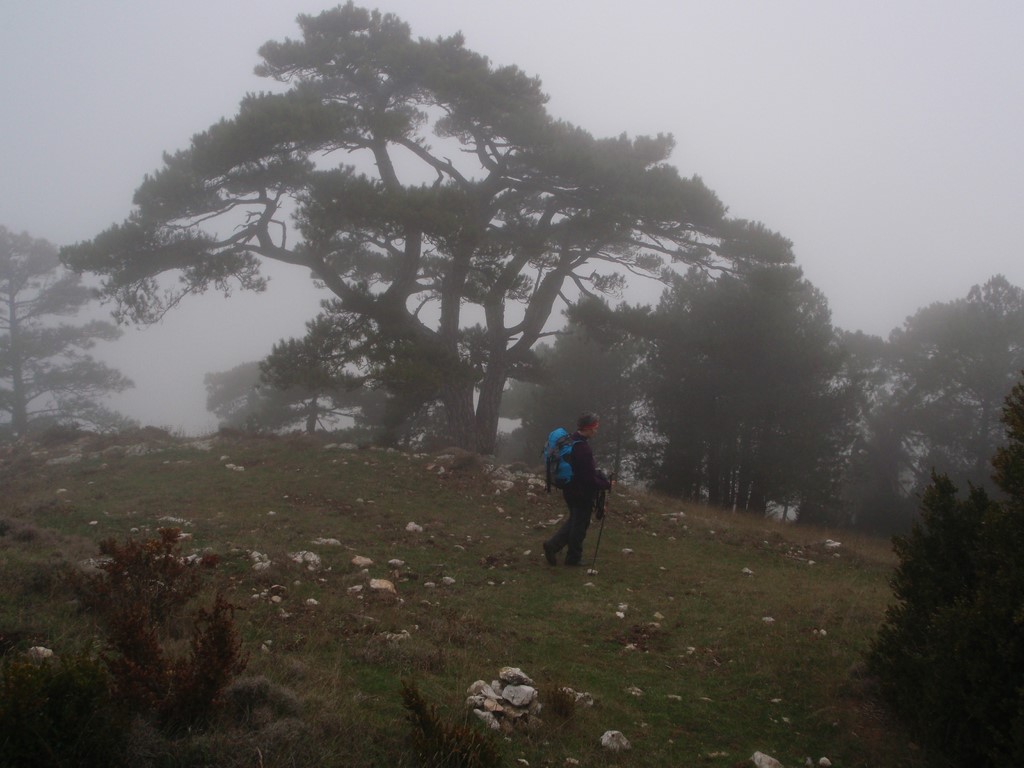 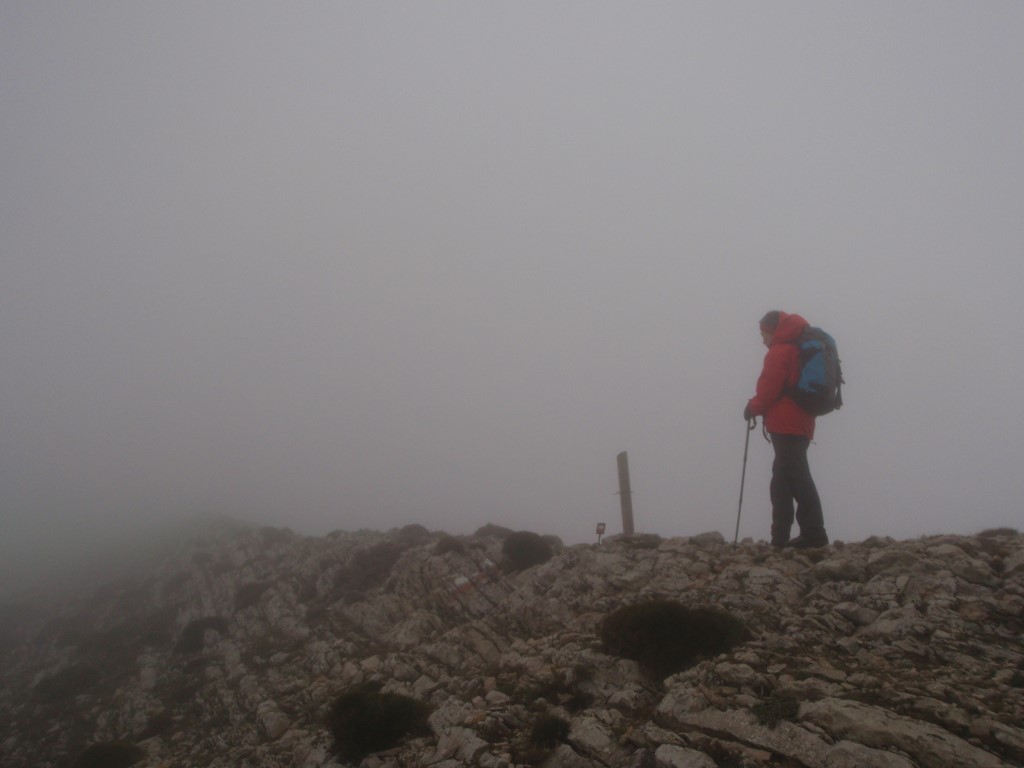 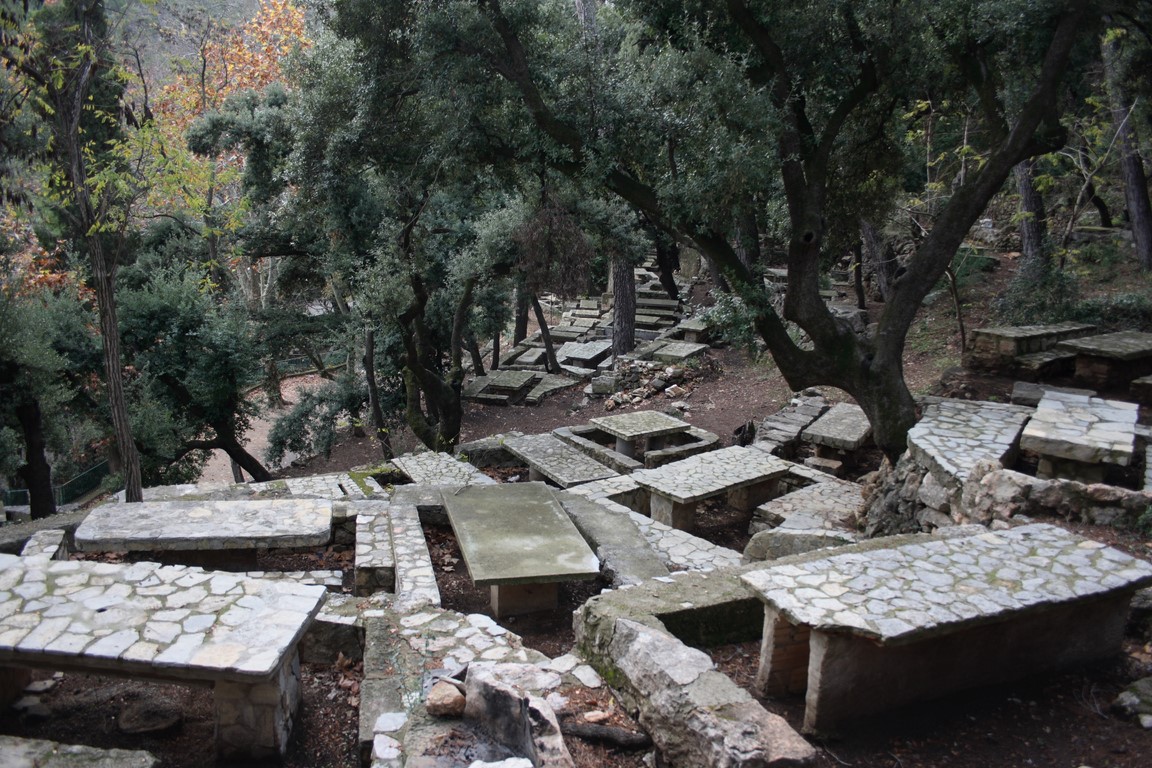 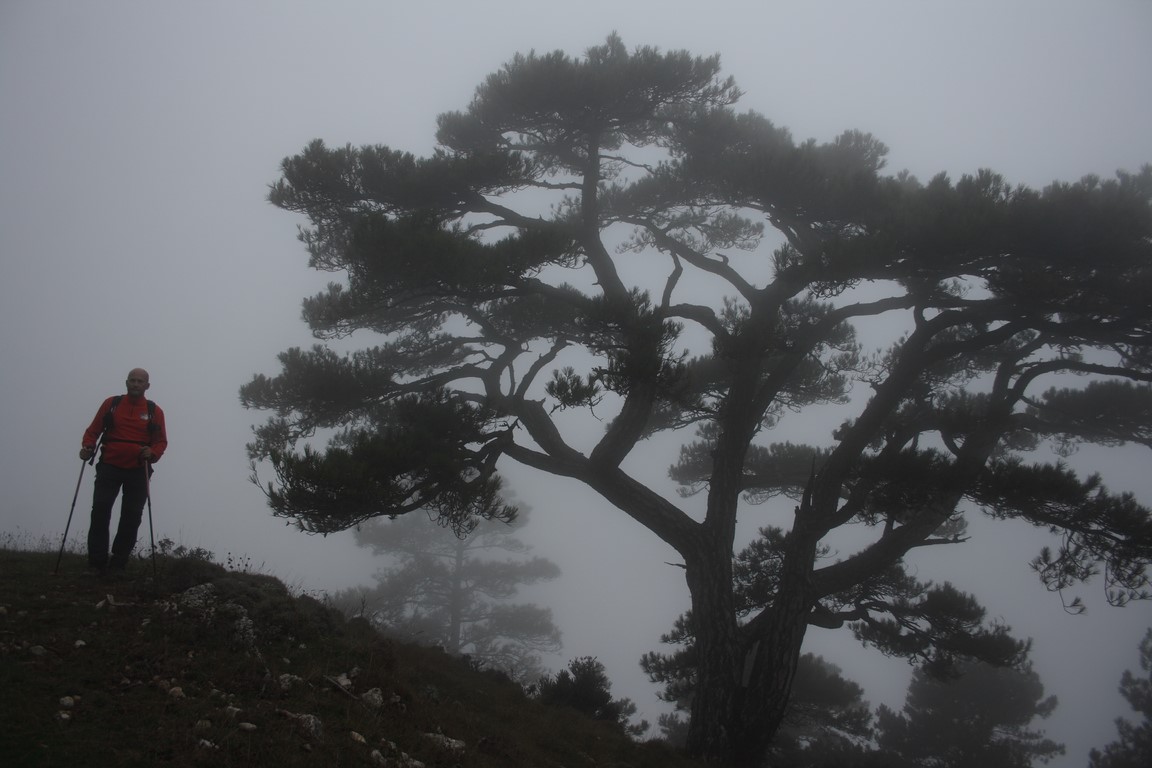 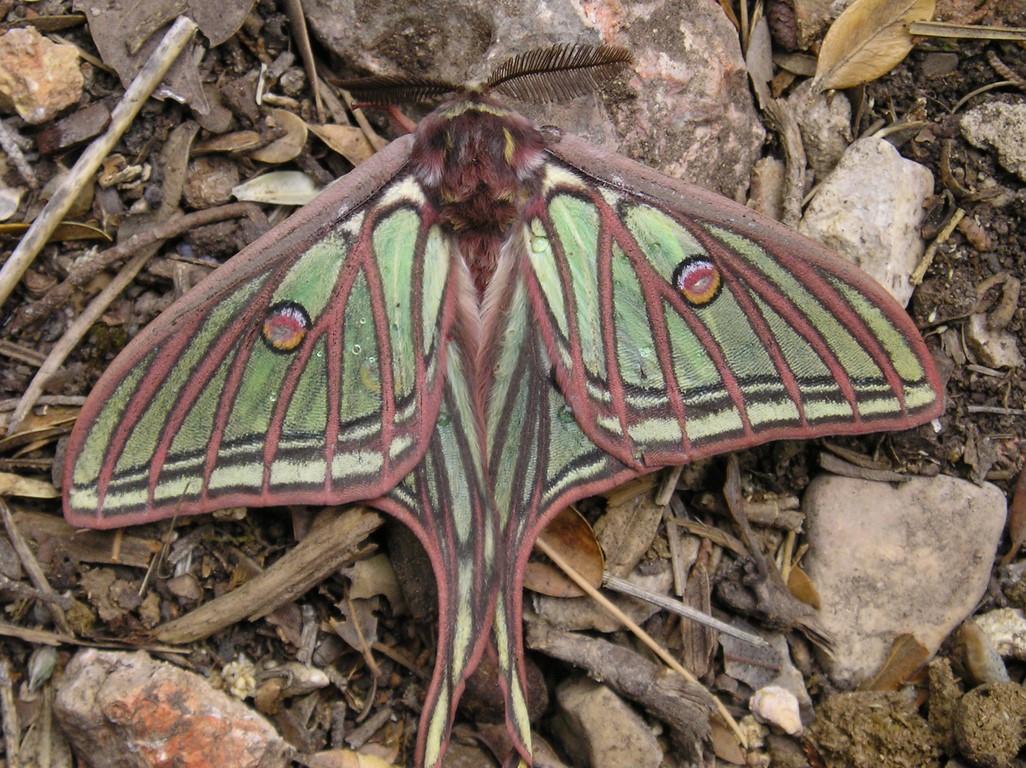 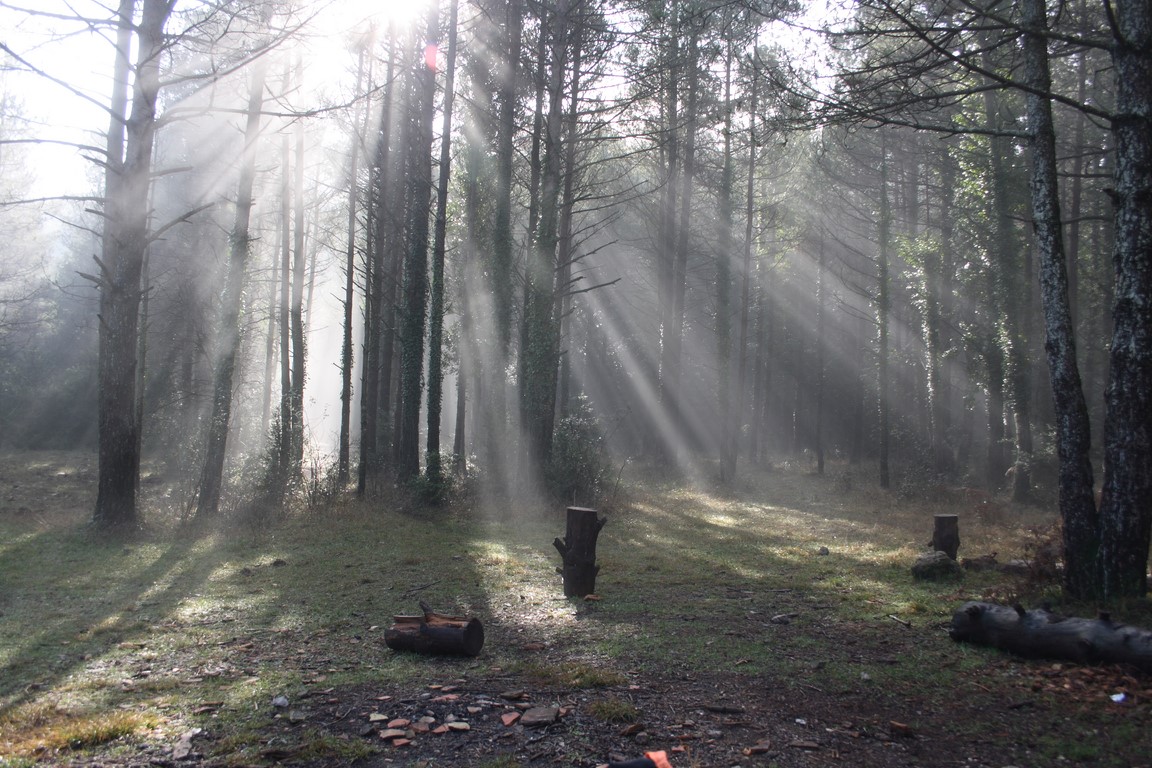 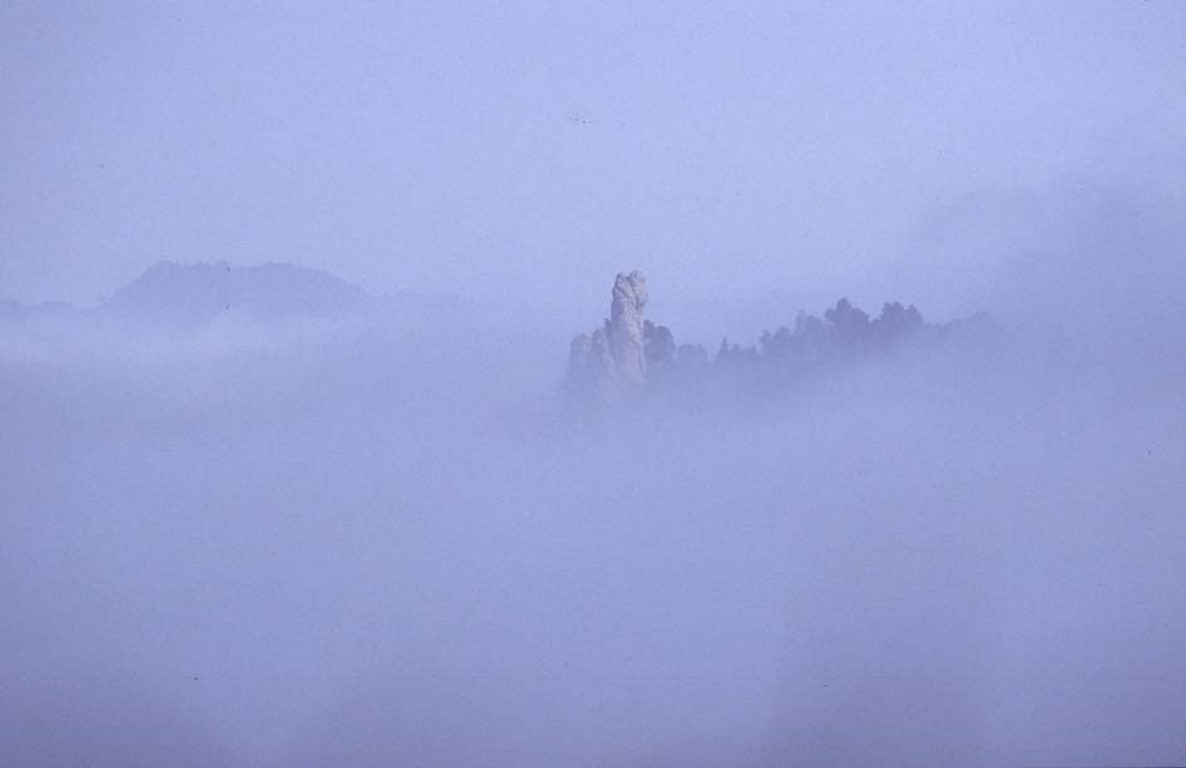 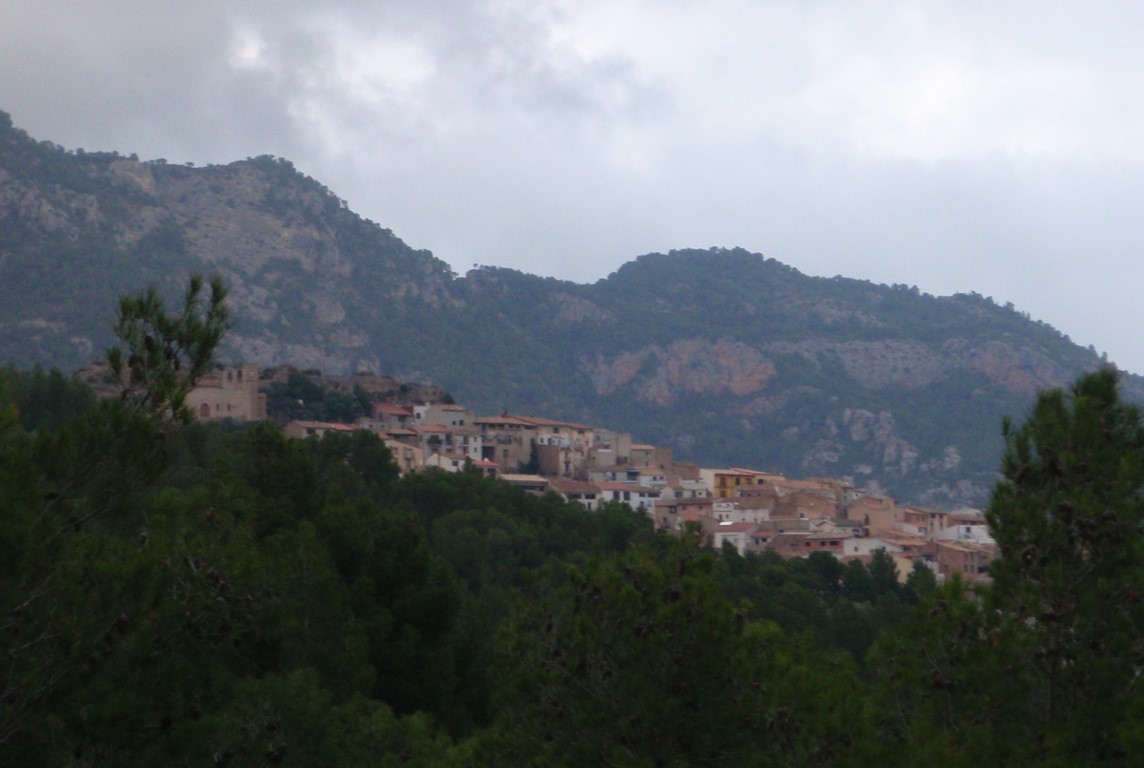 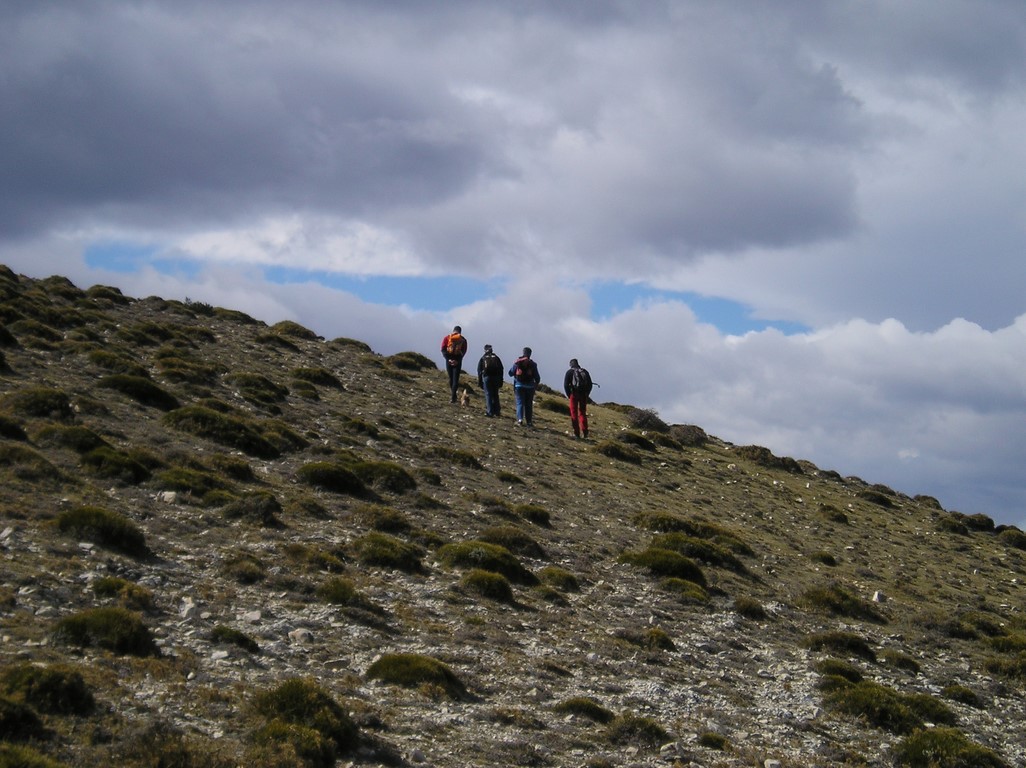 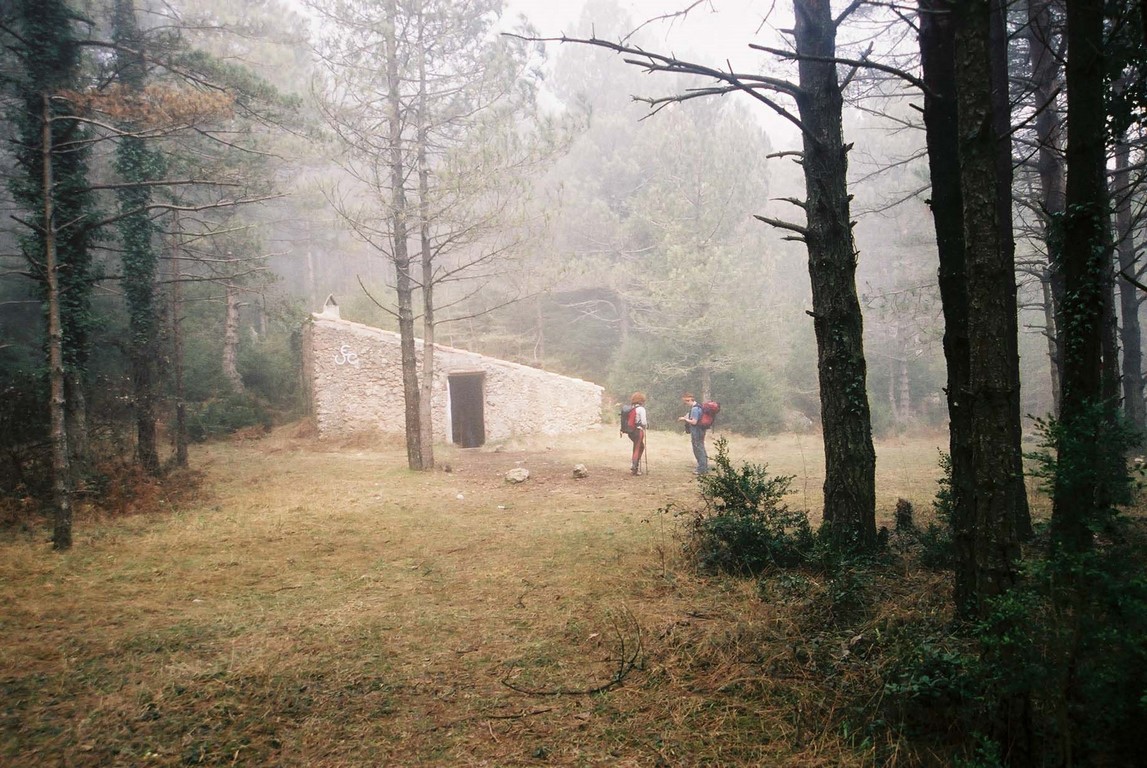 We leave the Refugi by the paved track to the Coll de la Carrasqueta, where we take a trail until the Coll de Pallers.

From there, a continuous up and down takes us  to the Cova Vidre (we see it on a cliff to our right). Some meters further on, we come to a track that will lead us to Casetes Velles going through the Font de la Llagosta.

Shortly after Casetes Velles we pass near refuge Mas del Frare (it´s closed), and following the track we reach the path of the Vallcaneres. We follow a part of this path until we reach the trail that passes under the Negrell peak and Font del Bassiol, to end on the track that will take us to Refugi Font Ferrera.

We leave the refuge following the GR-7, first by track and then taking the trail that passes through the Font del Bassiol and under the Negrell peak.

We will return to take the Vallcaneres track and then we will deviate to follow a trail in the Casetes Velles direction, passing through the Mas del Frare refuge (it´s closed).

From Casetes Velles we will follow a long path passing through the Font de la Llagosta in the Cova Vidre direction.

Passing below the ridge of the Marturi and in a continuous up and down we reach the Coll de Pallers.  From here, we´ll descent to Coll de la Carrasqueta, where we turn right taking the paved road to Nou Refugi de Caro, that is placed next to the road. 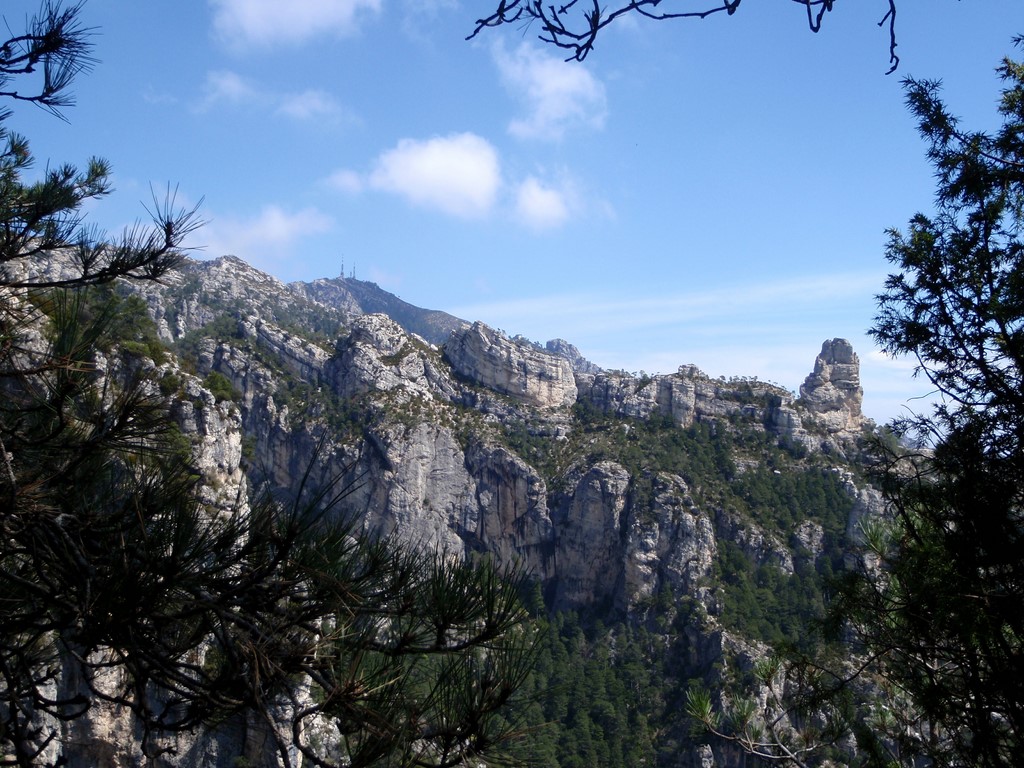 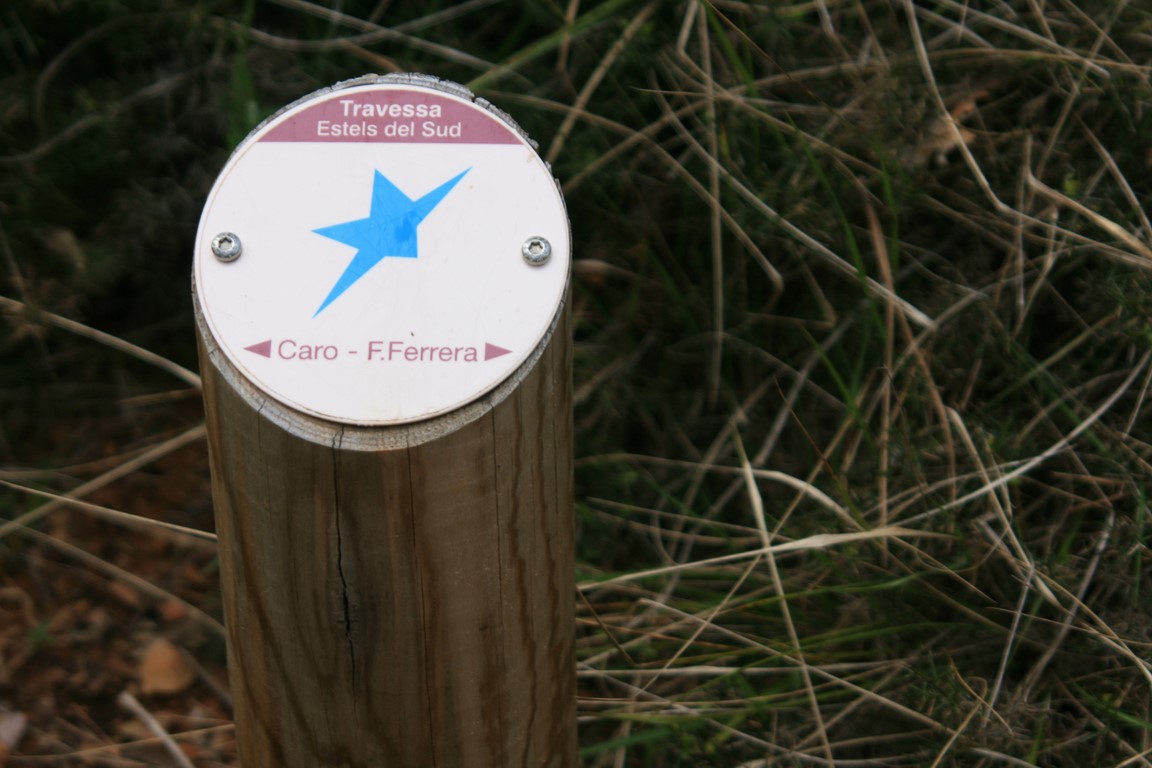 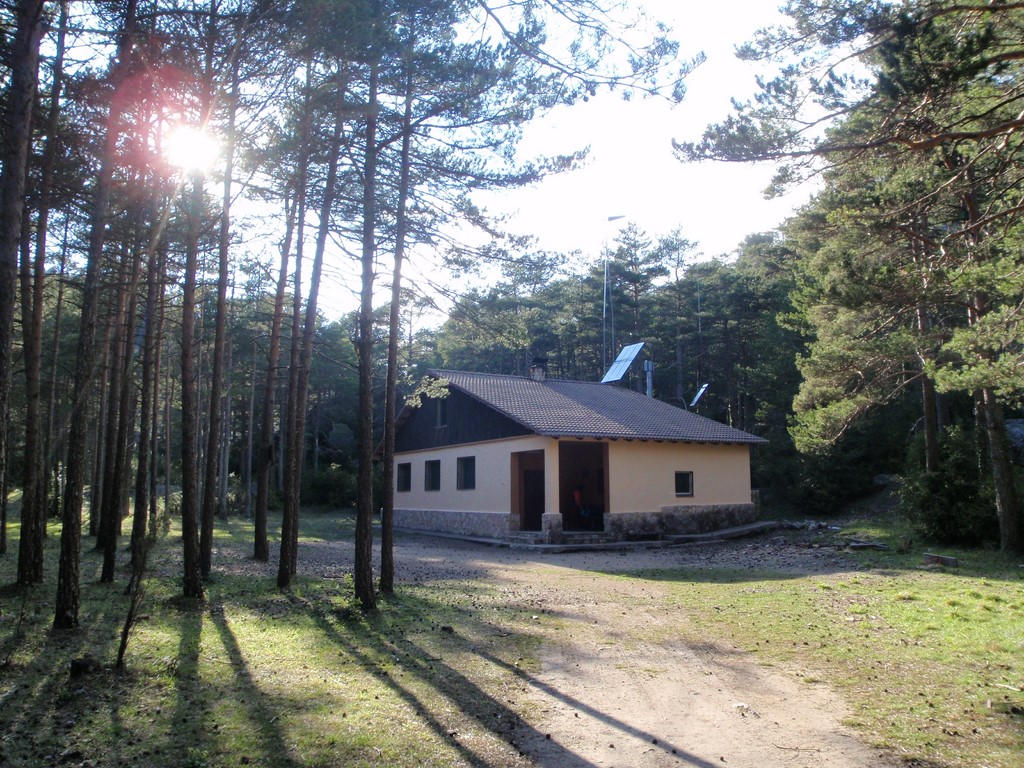 Send us the completed registration form and we will respond you as soon as posible.